Your reliable partner for AAV Development, Validation and Manufacturing. 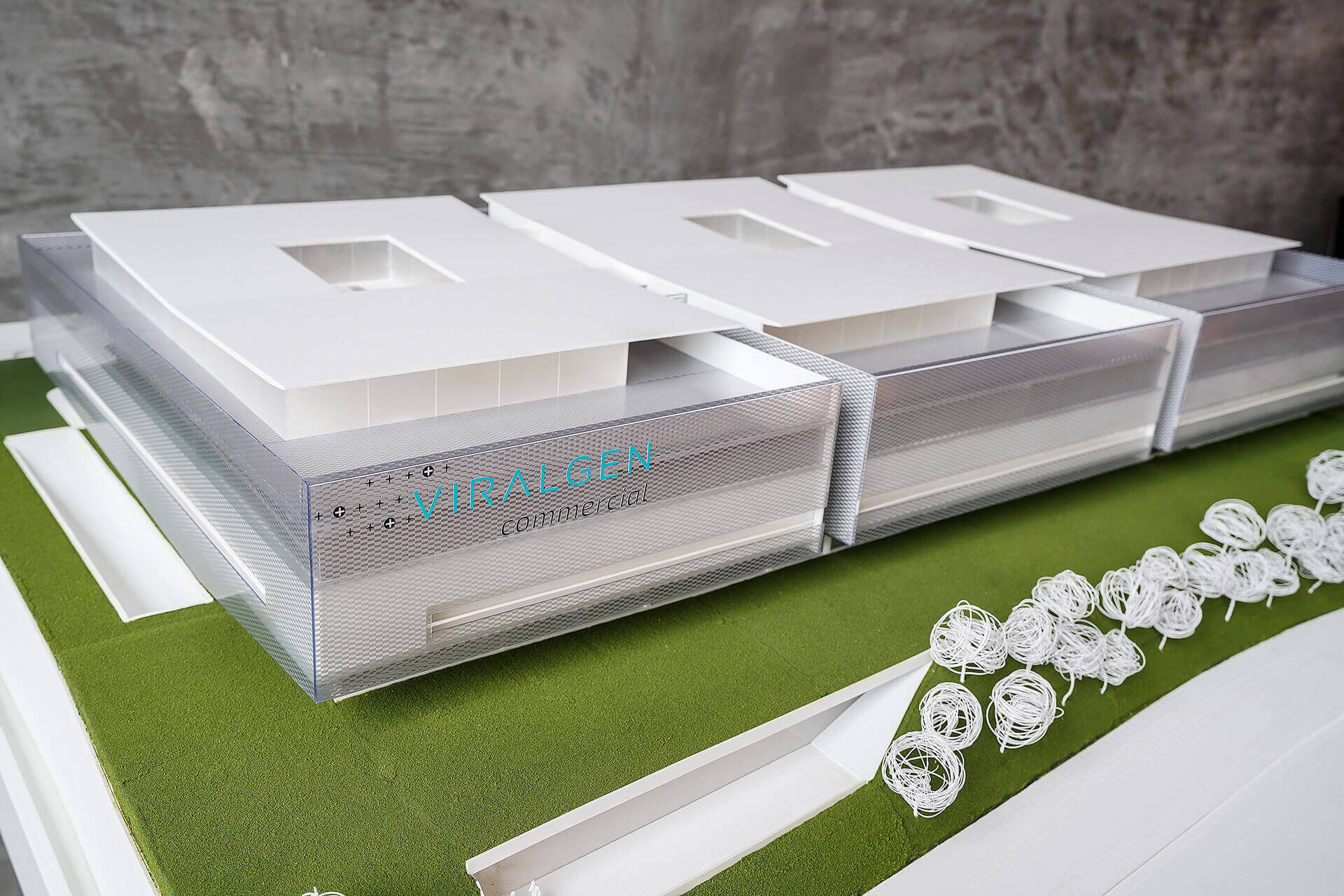 VIRALGEN, a leading pharmaceutical laboratory in the production of viral vectors for gene therapy, has announced the opening of a new production plant in the Scientific and Technological Park of Gipuzkoa, (Miramón), which will involve an investment of more than 50 million euros. This plant will have the capacity to supply the growing market for gene therapy, complementing the production for clinical trials already under way in San Sebastián. The construction of the plant will begin at the end of this year and it is expected to begin operations in the spring of 2022. This new infrastructure will be one of the most modern plants in Europe for the production of gene therapy treatments and about 200 positions of high-level jobs will be created.
The news has been announced during a press conference in San Sebastián, where VIRALGEN CEO Javier García, along with Arantxa Tapia, advisor of the Department of Economic Development and Infrastructure of the Basque Government, Markel Olano, General Deputy of Gipuzkoa and Rikardo Lamadrid, General Director of Technology and Advanced Learning of the Department of Education of the Basque Government.

At the meeting with media, VIRALGEN has also been announced the agreement recently reached with the Basque Government to develop a new specialization program of dual Vocational Training, with the aim of promoting training in Biotechnology and techniques of GMP production (Correct Manufacturing Standards).
During his speech to the press, Javier García thanked the commitment and support received by the different institutions of the Basque Country, remarking that “today we are here announcing these two initiatives, as an example of the collaboration between all involved agents. "
The new plant will be located on a 14,000 m2 plot, which will be divided into three modules that can operate independently and will allow to multiply by 15 the current capacity of VIRALGEN that already works with companies that will take their products to the market, after regulatory approval. It should be remembered that VIRALGEN received last August the cGMP certification of the Spanish Medicines Agency.

As explained by the CEO of VIRALGEN, “in Miramón we will have one of the highest concentrations of gene therapy production capacity in the world; and our partners will be Esteyco, as thr architectural design and execution suppot, and Albian in the engineering area ”. "We are facing the opportunity and the challenge of making Gipuzkoa a world leader in the production of gene therapy."
Gene therapy focuses on the use of virus-based technologies that deliver therapeutic genes to human cells or tissues to correct the genetic defect directly. "Gene therapy will help cure the most important diseases of the 21st century such as cancer, neurodegenerative diseases, and rare diseases of genetic origin," At this point, García has highlighted he that the American drug agency (FDA) plans to receive more than 200 new applications for new indications for gene therapy in 2020 and, 10-20 new products could be approved each year for cell therapy and gene therapy by 2025.
The manufacture of these products is one of the bottlenecks of this expansion and represents a huge opportunity for growth and scientific development.

Regarding the new ad hoc FP program, García has pointed out that “we are currently working with the Basque Government to define a dual FP program. It would be a 3-year plan with specialization. That is to say, a program that takes advantage of 2 years of training cycle that already exists, taught in FP centres in Donosti, to which we would add a year of specialization”. "As a result, students would come out with a very specialized training in manufacturing and control of biotechnological products in the field of gene therapy."

At this point, García wanted to thank “the support of the Basque Government, through the technology and industry programs of the Department of Economic Development and Infrastructure, and for the effectiveness of the Department of Education. I want to highlight the very close collaboration that our team is having with the Basque Institute of Knowledge of the FP, attached to the Department, which is coordinating the design of the program. And also the support of the Provincial Council of Guipuzkoa, to the plans of VIRALGEN, in terms of investments and talent”. The signing of the collaboration agreement with the Basque Government is planned for the upcoming months and it is expected that the first students can begin their training at VIRALGEN in the spring of 2020.

The counsellor Arantxa Tapia has referred to VIRALGEN as an example to follow in reference to the attraction of a foreign investment in Euskadi. From the beginning, it generated our interest in its commitment to R&D combined with manufacturing capacity. The Spri Group coordinated, from the beginning, the collaboration between the institutions with the company, and that effort made it possible to leverage the initial investment, linking it to the Basque strategy of intelligent specialization in the field of health, consolidate it in our own ecosystem of R&D&I, and all this has allowed to project its growth in space, activity and employment generation with a new economic investment of relevance announced today. To all this, now, we add ad hoc training to the needs of the company, generating talent, and providing added value for both, the company and the system as a whole.
Tapia has valued the station made by VIRALGEN in Euskadi; an initiative that has been supported by programs and instruments to support technology, industry and venture capital, trusting that the itinerary made so far contributes and locates Euskadi in a benchmark of production in the field of health research.

The President of the Regional Council of Gipuzkoa, Markel Olano, said that the construction of the new VIRALGEN plant in Miramón is a “great news” for the whole territory, as long as it will bring “the definitive support” to the commitment to Biosciences and health sector in Gipuzkoa, driven “in a determined and sustained manner over time” by the institutions and agents of this sector. As a result Gipuzkoa is currently “a bio ecosystem” with very relevant assets for the development of biotechnology companies, such as “important scientific-technological capabilities” in its R & D & I centres, a “modern and well-developed public” health system, infrastructures and institutions for “support for entrepreneurship”, a generation of new “very dynamic and well-focused” bio-companies and “important capacities” in the manufacturing and ICT sectors.

As Olano has assessed, the new VIRALGEN plant has the potential to generate “a tractor effect” to attract and generate new economic activity in a strategic sector such as biosciences, giving rise to “multiple opportunities” for collaboration with the other agents of the ecosystem in fields such as talent, training and research, among others. For all these reasons, it has recognized the commitment to Gipuzkoa that the promoters of this company have made, offering the proximity and support of the Council of Gipuzkoa for the development of VIRALGEN’s activity in the territory.